A perfect balance of sweet and savory, this pumpkin pizza recipe has the deal sealed with bacon and delicious roasted garlic and ricotta cheese sauce! It's the ultimate harvest pizza recipe!

Bacon makes everything in life taste better. Am I right? In a way it’s kind of like salt...only better. If you love bacon, then you’re going to fall head over heels for this pumpkin pizza.

The pizza sauce is a sweet mixture of roasted garlic and ricotta! It has fresh pumpkin and green apple that is cooked in the fat rendered from the bacon. Then it is balanced with peppery arugula. Pizza night will forever be changed and store bought or restaurants will never live up to this pumpkin pizza recipe.

How To Make The Sauce

Unlike a lot of pumpkin pizzas, which rely on canned pumpkin puree for the autumnal flavor, this recipe uses a different sauce: ricotta cheese and whole roasted garlic which get muddled together.

For the best success, roast the garlic head until the cloves are soft enough to smash with the back of a spoon. If you over-roast them, they'll be too tough to crush. If you have an extra large head, you may need to add an extra 5-10 minutes

Alternatively, you could leave the garlic cloves whole and scattered on the pizza. However, you get a better distribution of flavor in the sauce.

If you're worried about cooking fresh pumpkin for your harvest pizza, don't stress. It seriously is super easy.

The first thing to know is that you want to buy a sugar pumpkin. (Also known as a pie pumpkin.) These are sweeter pumpkins than the carving ones more commonly sold at stores, which tend to be watery and bland.

Once your pumpkin is peeled and the seeds removed, cut it into small diced pieces. It then gets sautéed in the rendered bacon fat to give it an al dente texture and a little extra flavor.

You know the pumpkin is done cooking when it is just starting to be easy to bite into. About 10 minutes of light cooking over medium heat.

Keep in mind that this also includes cooking the green apple at the same time, which will slow down the cooking of the pumpkin for the last five minutes. If you opt to not use the apple, the fresh pumpkin may need less time to become al dente.

Since we're precooking the pumpkin, the focus during baking will be on making sure the pizza dough is crispy and the cheese is melted.

Getting a Perfect Pizza Crust

Once you make the pizza dough, rub a large bowl and the dough with one tablespoon of olive oil. Cover the bowl with a damp paper towel and let rise for at least 45 minutes, or until doubled in size.

Also, for this pumpkin pizza I recommend using a whole wheat crust. This will give the harvest pizza a richer and deeper autumnal flavor that accents the other overall profile better.

Once ready to cook, choose which of the following methods is best for you.

I personally love to use a pizza stone when making homemade pizza. It gives the crust a great texture and crisps up just right. Make sure to preheat the oven with the stone in it. Then, assemble the pizza on a floured pizza peel and transfer it onto the heated pizza stone once ready to cook.

If this isn't an option for you, you can stretch the dough out on a floured surface then transfer to sheet pan instead. If cooking directly on the baking sheet makes you nervous, you can line the pan with parchment paper before adding the pizza dough.

You can also use a pizza pan for more of a "deep dish" option, but this isn't my favorite method for this pumpkin pizza recipe. I find that the pizza is too fluffy and doughy and the flavors in the pizza dough don't balance as well with the toppings. Crispy crust is better.

Which Toppings To Use?

I've listed my favorite toppings for harvest pizza in the recipe, which include:

However, you can mix it up a little by replacing the raw with caramelized onions or topping the mixture with sage leaves.

I've also left the cheese option vague so you can mix it up how you like. I tend to use the four cheese blend from Trader Joes, which has fontina, mozzarella, asiago, and parmesan cheese in it. However, some aged havarti, white cheedar, or gouda cheeses would all taste great as well.

It may seem like an odd thing to put on a pizza, but arugula’s slightly spicy and peppery flavor adds a lot to the flavor profile. It’s a very tender green and doesn’t have a super high concentration of water, so it tends to get crispy and paper thin if baked for too long.

For this pizza, I recommend placing it under the bulk of the toppings before cooking. This helps it maintains its supple texture with little fear of it ruining your pizza or preventing the crust from baking because of its moisture content.

If you would like to try some of other savory pumpkin recipes, I recommend: 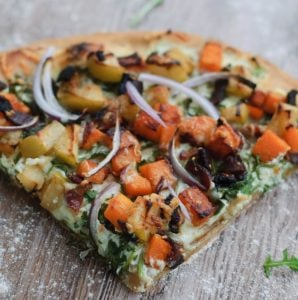 Pumpkin and Apple Pizza with Bacon

*Also referred to as a pumpkin pie pumpkin, or pie pumpkin.   For extra autumnal flavor, sprinkle on 1-2 Tablespoons of minced fresh sage leaves.  If you reserved the pumpkin seeds from your sugar pumpkin, use them to make toasted pumpkin seeds here.