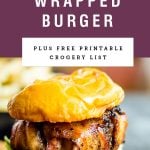 This decadent bacon wrapped burger recipe is so juicy and delicious you'll wonder how you can ever eat burgers a different way!

How To Wrap Meat In Bacon

The easiest way to wrap meat in bacon is to create a weaved lattice pattern like a pie. By doing this you create a flat surface with built-in binding. This keeps you from needing to use a toothpick or anything to help hold each slice of bacon onto the burger.

For most bacon wrapped burger recipes, do this with four strips of bacon. Lay two of them down side by side, then lift up one and lay a strip going the opposite direction. Repeat to finish the pattern.

Once the cheddar cheese stuffed ground beef is on the bacon, work in a circle wrapping every other piece over the burger.

Once you go to cook the bacon wrapped burger recipe it is very important you put the side with the loose ends down on the grill first. This cooks them very quickly so they sear to each other like glue. If you don't they shrink away from the burger patty and fall off.

How To Stuff The Cheese Inside

To make the cheese stuffed burgers, start by making the patties.

In a large bowl mix together the ground beef, salt, pepper and Worcestershire sauce. Split it into 8 evenly sized pieces, roughly 2 ounces each.

Flatten out each of the patties and placing one down on each of the woven bacon strips. Next, add the cheddar cheese slices and push them down into the meat.

I recommend cutting the cheddar cheese about ¼" inch thick right off an 8 ounce block. Depending on the block you might need one or two pieces.

This is my favorite method because it creates that thick melty center. If you use deli sliced cheese, it gets lost and overlooked in the flavor of this bacon wrapped burger recipe.

Once the cheese is in, add the second flattened half on the burger, pinch together the ends all the way around and then push down on top to adhere the burger together.

When Is It Done?

It is tricky to gauge when this bacon wrapped burger recipe is done because none of the traditional methods work. You can't easily use a thermometer and you can't accurately feel it because of the bacon.

Let me reassure you that it's better for this burger to be cooked to well done on the inside, and it's not a bad thing. By cooking it to well done not only are you cooking away all potential bacteria, but you are giving the bacon enough time to cook on the sides and the cheese to melt.

Since the bacon bastes the burger in the fat, it won't dry out or become rock hard as you cook it.

Instead, judge doneness by the bacon. Cook it well done on both ends and slightly chewy around the sides.

Keep with traditional toppings like lettuce, onion, and tomato for this bacon wrapped burger recipe. It keeps from distracting from the amazing goodness that is the best burger you've ever tasted.

Make grocery shopping simpler with a printable grocery list for this bacon wrapped burger recipe. The list is in standard grocery store amounts. If no size is specified, even the smallest package provides more than enough.

This juicy burger is the only way you'll eat them from now on. It is truly the best burger you'll ever eat!
Course: Sandwiches & Wraps
Cuisine: American
Author: Mackenzie Ryan
2 servings
Prep Time: 15 minutes
Cook Time: 20 minutes
Pin it for later?