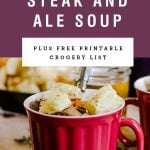 This hearty steak and ale soup recipe is comfort food in a bowl. Topped with golden brown caramelized mushrooms and puff pastry croutons.

The steak and ale flavor originated as a meat pie in Britain, but variations of it exist all around the world. Normally, it is made of steak in an ale gravy that is all wrapped up in a rough puff pastry pie dough.

What Kind of Ale?

Similar to regional cuisines of North America, the type of ale for steak and ale soup recipe varies. The most commonly used ales are amber, brown, or Guinness because they have deeper flavor.

Use whatever your favorite ale is for this recipe, but I would avoid bright and hoppy beers like IPA’s, hefeweizen, or lagers.

How To Brown The Mushrooms

The best way to enjoy this steak and ale soup is with the mushroom browned and added in right before serving.

You can do this by cooking the mushrooms in the pot over medium heat at the beginning. Or you can cook them right before serving.

The reason for waiting until the last moment to add them is so that cooked mushrooms don’t become bloated with the soup broth. This tends to remove the golden brown caramelization that you worked so hard for. So instead, the mushrooms become more of a garnish.

If you cook them at the beginning, which is my recommendation, it leaves behind fond. This is the little bit of leftover food that sticks to the bottom of the pan. Then, while cooking the steak it gets lifted up and becomes part of the gravy.

This is a great way to add the flavor of the mushrooms to the steak and ale soup, while waiting to add them in at the end.

This steak and ale soup uses rustic vegetable cuts to keep with being a pub food. You don’t have to be precise with them, but make sure that they aren’t so large that they don’t cook in time. Try not to have any larger than 1-inch pieces.

Make grocery shopping simpler with this printable grocery list for this steak and ale soup recipe recipe.  It lists everything in standard grocery store amounts.  If no size is specified, even the smallest package provides more than enough.

Steak and Ale Soup With Mushrooms

If you're looking for a modern culinary education at home, then you've come to the right place. Let me help you become your own master chef by learning professional cooking techniques without the cost of culinary school! Learn more about me and the blog. 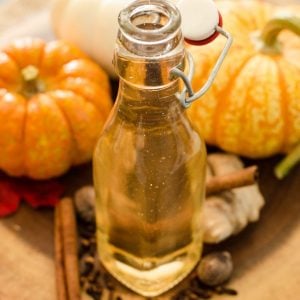