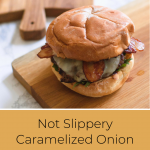 Nothing is as frustrating as a cookout at preparing a delicious burger only to have it fall apart when picked up.

This is typical problem with caramelized onion burgers. And they just never seem to go back together the way they originally were, like Humpty Dumpty.

This is one of my biggest frustrations about burgers. In order for it to be fun and flavorful, it always seems to fall apart.

If you’re ready to beat that problem, read on dear friend. I have the solution.

What Kind Of Onion is Best?

Since you are caramelizing the onions for this burger, it is best to go with an onion that is sweet. Sweet yellow onions are my favorite, but red and Vidalia onions work as well.

Caramelizing onion is a bit of process, and can take up to a few hours. However, the task is easily accomplished in the amount of time it takes to preheat your grill.

How To Make The Paste

To make the caramelized onion mixture for the burger, start by caramelizing the onions in skillet over medium low heat. Put in the oil, add the onions, and let them take their time to cook, stirring occasionally.

While the onions cook, make the roasted garlic.

Once the onions finish caramelizing, transfer them to a mixer or food processor. Add in the mustard, Worcestershire sauce, parsley, garlic, and salt and pepper. Blend until smooth.

Next, add the paste mixture into the ground beef in a small bowl. I like to spread out the paste on either side of the beef before beginning to mix it. This helps cut down overworking the meat and making the caramelized onion burgers tough.

After the caramelized onion paste is inside the burger, proceed to cook them on the preheated grill.

You don’t have to use a blender or food processor to do this method.  Just know that the smaller you cut your onions, the easier it is to mix it into the meat.

Sliced onions create a fault-line in the meat that often forces the caramelized onion burgers to fall apart. The same goes for a large dice. Focus on knife skills and get the cuts as small as possible.

How To Cook The Burgers

These caramelized onion burgers cook really quickly once the grill is preheated. You want to get the grill heat to medium high, or around 425°F.

At this temperature the caramelized onion burgers only need about 4 minutes per side for a medium rare burger. And only mere minutes more for well done.

Because of the fat in the burgers and the caramelized onion paste, the grill doesn’t need brushed with oil. (However, if you chose a lower fat ratio meat, it may.) Instead, focus on not moving the burgers more than needed.

When a spatula pushes down on a burger it pushes out all the fat and juices that keep the burger moist. The same goes with flipping it too much. Or even just lifting the burger a bit to see if the grill lines are there.

As difficult as it tends to be, try to let the burgers rest and do their thing. Once finished and cooked to your favorite doneness, transfer the burgers to a plate and top them with the cheese.

If the cheese goes on the burgers while still on the grill, the cheese tends to melt off the burger. Instead, let the residual heat from resting do the work for you. Then the cheese forms around the burger instead of falling off.

While I recommend adding provolone cheese, arugula, and bacon to this caramelized onion burger, any of your favorite toppings work also.

Try adding some blue cheese, a fancy aioli or mayonnaise, or balsamic to the onions. You can even do brie, goat cheese, or mushrooms. (Although I recommend adding the mushrooms the same way as the onions.)

For some more delicious burgers to try, I recommend:

Make grocery shopping simpler with this printable grocery list for this not slippery caramelized onion burger recipe. Everything is listed in standard grocery store amounts. If no size is specified, even the smallest package provides more than enough. 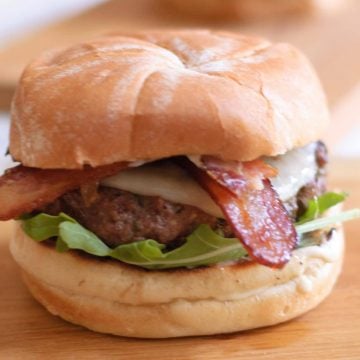