Make your macaroni & cheese, lasagnas, gratins, or “cream of” soups, and more even better with this recipe for rich & creamy classic Béchamel sauce.

We made it! This is the last of our 5 French Mother Sauces for #saucesome March and I saved the best (or most beloved) for last – Béchamel Sauce! This sauce is the base for so many yummy things – from Macaroni & Cheese, to gratins, to homemade “cream of” soups. This is one of those sauces that once you master it, you’ll find yourself using it all them time!

What is Béchamel Sauce?

Béchamel sauce was original made with lean veal, herbs, and spices that were simmered before adding cream and a white veal stock and reducing. Somehow, that version of the sauce has evolved into what we know Béchamel as now, which is just a roux and milk with some aromatics.

This is the only one of the 5 mother sauces that has a known origin, being named for a gentleman who was a financier and chief steward to King Louis XIV. It shows up in many cookbooks dating back to the Renaissance but was named a Mother Sauce by Auguste Escoffier in 1902.

What Is An Oignon Pique

An oignon pique (pronounced uh-nyon pee-kay) is french for “a pricked onion”. It’s really just a fancy way of saying something that is super simple to make. An oignon pique is made my taking half of a peeled raw onion, and placing a bay leaf on top of it. Then you use a couple cloves to attach the bay leaf – “pricking” the onion. One of the nice things about an onion pique versus adding aromatics in other sauces is it is really simple to strain out. Sometimes the onion will break apart a little bit, but for the most part, it beats the snot out of straining mirepoix.

We’ll cover small sauces down the road at some point, going over how to make a proper Mornay, Cheddar Cheese, or Soubise, but for now, I want to talk about two quick variations for Béchamel sauce – a light and a heavy. Based on what you’re making, you may want a sauce that is thinner, or thicker – and instead of losing flavor by just watering it down with more milk, or a weird texture from over-reducing it, the easiest way to adjust the amount of roux, but not change the cooking time.

For a light Béchamel sauce use 1.5 oz. each for your roux, and for a heavy Béchamel, use 3 oz. each.

It’s as simple as that!

How to Scald Milk

Scalding milk, in many ways is similar to proofing yeast for doughs. In fact, some dough recipes will call for scalded milk in place of water to give the dough extra flavor and improved texture. But what is scalded milk? Scalding milk is when you bring milk to the top of the poaching temperature range, reaching 180°F, before removing it from the heat.

Scalding used to be more about killing off bacteria, as it was used before pasteurization became so commonly used, but for Béchamel sauce it is more about cutting down the amount of time that your sauce has to cook. Because milk has a tendency to burn to the pan at higher temperatures, this helps eliminate some of the cooking time to help prevent that.

In other cases, scalded milk might be used to infuse flavors (such as vanilla beans for custard) or in bread making to keep the dairy proteins from killing off the gluten.

TIP: If you don’t have a thermometer on hand, you’ll be able to visually tell when you’ve hit scalding temperature because the milk will begin developing small bubbles on the outside edge next to the pot and the milk will begin to get a very thin film on top.

I would like to note that if you’re doing a really good job of stirring almost constantly, sometimes it can be hard to notice the bubbles or film because you are stirring them back into the milk. It’s okay to take a minute or two to stop stirring when you think you’re near the correct temperature to see if those form. You just don’t want the milk to start simmering.

To really rock this Béchamel Sauce and make it to perfection – here are some culinary proficiencies I recommend reading up on before beginning.

How To Make It Better

I hope you’ve enjoyed our series on mother sauces for #saucesome March. I’d love to see pictures of your saucy creations on facebook, instagram, or twitter – @foodabovegold. If  this is the first part of the series that you’ve come into, here are the links to check out the other 4 French Mother Sauces.

Are you ready to get saucy? Let’s make this final mother sauce – here’s a printable grocery list so you’re ready for the store :). 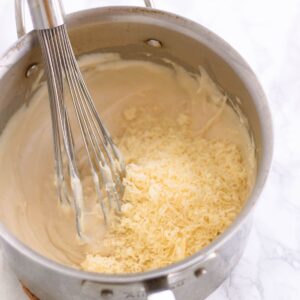 Béchamel Cream Sauce is the base for many delicious things we make, ranging from Macaroni & Cheese, to gratins, to "cream of" soups. Use this recipe to make it to true French Mother Sauce perfection!
Course: Sauce
Cuisine: French
Author: Mackenzie Ryan
1 quart
Prep Time: 15 minutes
Cook Time: 45 minutes
Total Time: 1 hour
Pin it for later?

When stirring the sauce, be careful to not scrape the bottom of the pot in case anything has burned. This prevents the flavor from being released into the sauce.

Serving: 1g | Calories: 176kcal | Fat: 11.5g
Tell me how much you love this recipeand show off how you made it!
« Mother Sauces : Hollandaise Sauce
How To Make A Vinaigrette »