Learn how to make a tangy and flavorful hollandaise sauce. Plus, learn how to troubleshoot it and the ULTIMATE BROKEN HOLLANDAISE RECOVERY HACK!

We're almost done going through the 5 mother sauces for #saucesome March - and we're starting to wrap it up with our penultimate sauce - Hollandaise Sauce! This one is definitely the most difficult of the sauces, taking a much more practiced hand for it's success, but the end result is a luxurious, full-bodied sauce that is fantastically impressive and remarkably delightful.

What Is Hollandaise Sauce?

Established by Auguste Escoffier in 1902 as one of the five french mother sauces, like Velouté, the origin of Hollandaise is unknown, but you've probably had it (or seen it) served on delicious breakfasts, with asparagus, or heard Mrs. Patmore talking about it on Downton Abbey.

Hollandaise, unlike the rest of our mother sauces, is made by using eggs and butter instead of stock or milk. Hollandaise sauce holds the trophy for being the most impressive of the mother sauces because it can easily go south if even just a few things are altered. Whether it be the amount of acid, the amount of heat, or the amount of liquid. Similar to baking, Hollandaise needs precision for perfect execution.

Like I mentioned before, Hollandaise is a difficult sauce because it's easy to mess up, giving you a broken and separated sauce that is grainy, tastes funny, and just looking at it makes you say "Ew" (complete with Jimmy Fallon accent). The goal of Hollandaise is to break down the liquid (through whisking) into particles so tiny that they can't separate from the egg yolks; this takes time and focus to achieve. If you're not careful, you can "break" the sauce - which is when it separates. This can occur in a few different ways:

TIP:  For better endurance when whisking, try holding the whisk underhanded, using your forearm to do the work, not your wrist.

If you're really nervous about making Hollandaise sauce, don't let this list stress you out. At the bottom of this post is a troubleshooting guide that will help you out if something begins to go wrong.

This is one of the great debates when it comes to making Hollandaise sauce. Traditionally, clarified butter is what is used because the water content has been evaporated out of it, allowing for the sauce to be thicker and more easily emulsified. This doesn't mean that whole butter is a bad choice, though. If you're craving Hollandaise, but don't want to take the time to clarify your butter - you can absolutely still make it with whole butter, it will just be a little thinner. The recipe I've given you today uses clarified butter, but if you would like to use whole butter, you'll need 25% more butter (½ pound instead of  7 oz.) to get the correct consistency.

If you're ready to own Hollandaise and make it fear you, then make sure to read some of these other related articles on the necessary skills & techniques to make your Hollandaise sauce the best ever.

How To Make It Better

There really isn't much to focus on here, because with a Hollandaise the focus is usually more on keeping it together rather than making it better.

If for some reason, something just happened to go wrong while you were making your Hollandaise sauce, check the resources below to see if one of these will help you fix your problem before you throw it out. . .sometimes it can be recovered!

If none of the these tips work, you can try using this "ULTIMATE BROKEN HOLLANDAISE RECOVERY HACK". It's a pretty awesome hack that works really well - so I felt it earned the all-caps title 🙂

To recover a broken Hollandaise: Warm a clean bowl over a pot of almost simmering water then add in 1 tsp. of lemon juice or water. Vigorously whisk in 1 tsp. of your broken sauce until the mixture begins to get foamy. Repeat this several times, or until the sauce begins to form again. Reincorporate the broken sauce in a thin stream, while whisking quickly, until the sauce is recovered.

There are some pretty neat tricks out there for making 2-minute or "foolproof" Hollandaise, and I'm going to be straightforward with you - the blender trick really does work. Not everybody has an immersion (stick) blender at home, so it may not be the right fit for you, but if you have one - give it a shot! If you have a really high-powered countertop blender at home (like a Vitamix) you can do this same thing with that blender - just make sure to use the lid because it may whip the sauce around a little more than the immersion blender would.

To make a blender Hollandaise Sauce:

The reason this sauce works is because the heat created by the friction of the immersion blender "cooks" the egg yolks and creates the ribbon stage while breaking up the liquid into tinier particles than we can with a whisk. As a result, you can use whole butter much easier when making blender hollandaise than you can when you make it by hand. Just remember, you'll need a ½ pound of butter to create a similar consistency to a recipe that uses 7 oz. of clarified butter.

This is the second to last sauce is our #saucesome March series, and I hope you are learning a lot and enjoying trying the 5 French Mother Sauces. If you'd like to learn about the others, this is part 4 of a 5-part series, and you can check out them all below!

*Note:  When working with raw eggs, remember that there is always risk of food-borne illness. Consult a doctor right away if you begin to feel sick. 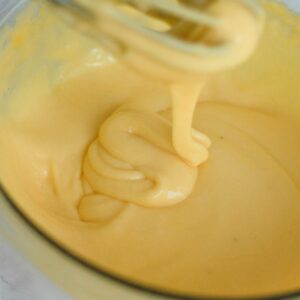 This recipe for a perfect hollandaise sauce makes a satiny and flavorful sauce that will make everyone want to come to your house for brunch!
Course: Sauce
Cuisine: French
Author: Mackenzie Ryan
1 cup
Prep Time: 15 minutes
Cook Time: 45 minutes
Total Time: 1 hour
Pin it for later?

*Note:  When working with raw eggs, remember that there is always risk of food-borne illness.  Consult a doctor right away if you begin to feel sick.

Serving: 1g | Calories: 258kcal | Fat: 27.9g
Tell me how much you love this recipeand show off how you made it!
« Mother Sauces: Velouté Sauce
Mother Sauces : Béchamel Sauce »