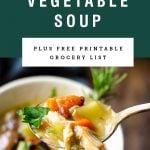 This leftover turkey vegetable soup recipe is bursting with flavor. It uses many of the same autumnal flavors you enjoyed on Thanksgiving, but put together in a new way.

After Thanksgiving is over, I can enjoy Thanksgiving leftovers for one day. Afterwards I want a completely new flavor. Enter this leftover turkey soup.

How To Make Turkey Soup From Scratch

There are two key pieces to a really great turkey vegetables soup recipe. One is the turkey, the second the vegetables. Both need to be cooked properly to get a fantastic soup.

For this recipe, the cremini mushrooms are browned in rendedered bacon fat. This give the turkey soup a heartier, even "meatier" flavor. Followed by the carrots, onion, celery, and other vegetables, the soup is filled with autumnal veggies and turkey meat.

After the vegetables are cooked, the browned bits on the bottom of the pan (called fond) get lifted with white wine. This keeps the flavor of the soup bright and vibrant instead of weighing it down.

To make the flavor of this turkey soup recipe unique from others, it utilizes some fresh rosemary and tarragon. These lend a fantastic aroma to the soup and the half and half at the end gives it a creamy texture.

How To Get Meat off the Turkey Carcass

After you have cooked the turkey, it is sometimes a bit difficult to get the meat off the bones. Especially as it cools down. To help get this leftover turkey meat off, you need to cook the carcass even more. You can remove the leftover turkey meat in a slow cooker, or you can boil it.

I recommend boiling for this recipe because the carcass gives extra flavor to the chicken broth and removes extra meat.

To do remove the meat:

Ways to Use Other Leftovers

If you want to use side dish leftovers in this turkey vegetable soup you absolutely can. Just remember, this changes cooking times so make sure to add it at the optimum step in the soup-making process.

Want to use up mashed potatoes?

This is a great way to cut down the time it takes to make this leftover turkey vegetable soup. It also makes it a smoother and chowder-like. Simply substitute 2 ½ cups of mashed potatoes and an extra ½ cup of chicken stock.

Maybe you have some extra gravy?

Substitute it for chicken broth in equal amounts. This cuts down on your cooking time and helps intensify the flavor. Because gravy is already thickened, you need to make sure there's enough liquid to cook the potatoes. Add more chicken broth if needed.

What about extra veggies?

This is where things get a bit trickier. If you feel the flavor of the extra leftover vegetables pair nicely with this soup, go ahead and add them. Don't do it until the end though because they are already cooked and you don't want to make them soggy. Some great additions might be parsnips, green beans, or butternut squash.

This leftover turkey vegetable soup is wildly delicious, but requires some attention and time because the flavors build each other. I know you're thinking about how you just spent all that time making Thanksgiving dinner, but the effort will be rewarded.

Simplify grocery shopping with this printable grocery list for this leftover turkey vegetable soup recipe.  Everything is listed in standard grocery store amounts. If no size is specified, even the smallest package will provide more than enough. 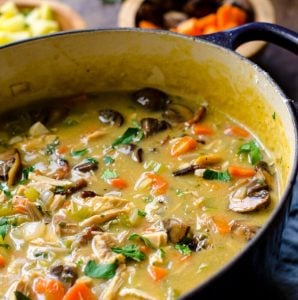