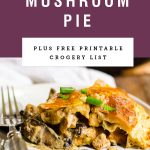 This easy skillet chicken and mushroom pie is made in one pan to make cleanup easier! Serve it for dinner as the ultimate comfort food filled with family favorites!

What Is Chicken and Mushroom Pie?

Chicken and mushroom pie is a British dish that is served in pubs or fish and chips restaurants. It is so popular that it is even stocked in supermarkets.

Typically it is made with a full bottom and top crust to get the appearance of a pie. Depending on the location, that crust is either made with a shortcrust like typical savory pies, or puff pastry.

For this chicken and mushroom pie recipe, skip the bottom crust to make a skillet version that is makes cleanup a breeze. It's a great way to get the same comfort food with less work.

How Is This One Pan?

Traditionally, chicken and mushroom pie recipes are made in a pot, then transferred to a baking dish. Once in the baking dish it is topped with the shortcrust and baked.

Instead, this comfort food recipe cooks everything in a cast iron skillet and puts the puff pastry right on top!

What Are Spring Onions?

Some variations of chicken and mushroom pie, like this one, use fresh spring onions. These are similar to green onions only with a larger and sweeter white bulb at the end.

You can easily substitute green onions, leeks, or just regular sweet yellow onions instead. Just don't leave out the onion completely because the sweetness helps balance out the meatiness of the rest of the ingredients.

What Kind of Bacon?

By choosing the thick cut bacon the bacon's texture becomes more similar to the mushrooms. If you choose regular cut bacon it often disappears into the filling, leaving the bacon flavor there, but no bacon crunch.

I also recommend a hardwood smoked bacon for this recipe. That means that it was smoked in an actual smoker instead of injected with liquid smoke. This results in a better flavor in your chicken and mushroom pie, whereas the other may become overwhelming.

How To Make It

To make this chicken and mushroom pie filling you need to build on the flavors one by one in a 12" cast iron skillet.

Cook the bacon over medium heat and transfer them to a bowl. add the mushrooms into the bacon fat and cook until a beautiful golden brown and. Add to the bacon and set aside.

Next add the chicken breast pieces and cook until they are golden brown as well. They should darken a bit from the browned bits on the bottom o pan leftover from the mushrooms. This is good because it is helping to pick it up and make a flavorful sauce.

Next add in the onion and stir in the flour and cook for one to two minutes. Pour in the chicken stock, milk, and cream and simmer for five minutes, stirring as needed.

The chicken and mushroom pie sauce should thicken up quite a bit but not stick to the bottom of the pan. If it does, then you have the heat up too high.

How To Add The Pastry

It is absolutely okay to use frozen puff pastry dough to make this chicken and mushroom pie easier. Just thaw it on the counter while you cook. It needs 40 minutes to thaw and it only takes about 30 to cook the filling. I recommend removing it from the freezer before beginning.

If the filling takes longer, return the puff pastry to the fridge until you are ready to use it.

To add the pastry the cast iron frying pan needs removed from the heat. Let it cool for a minute or two then place the puff pastry sheet on top of the pie.

If using prepared puff pastry sheets, you'll need to use both, reserving some to make the decoration for the top.

Fold up the overhanging edges of the pastry onto the top and pinch or decorate them as you like. Then use a pastry brush to brush it with a beaten egg yolk. This helps brown the top.

Lastly, before putting the chicken and mushroom pie into the 400°F preheated oven, add any decorative puff pastry pieces to the top. (Traditionally these look like leaves.) Brush any decoration with the egg wash and use a sharp knife to cut a hole for air to escape.

Finally, bake for 15 minutes or until the top is browned. It may take up to 25 minutes to get it as dark as you like.

Traditionally, chicken and mushroom pie is a British recipe made to be rustic and rough. It isn't meant to be the prettiest and most put together meal, but rather a perfect comfort food dinner.

Don't stress out about making it look perfect.

Make grocery shopping simpler with a printable grocery list for this chicken and mushroom pie recipe. The list is in standard grocery store amounts. If no size is specified, even the smallest package provides more than enough.

This comfort food is made in a single pan so clean up is easier but still has all the great flavor of the traditional
Course: Chicken, Main Course, One Pot/One Pan
Cuisine: American
Author: Mackenzie Ryan
8 servings
Prep Time: 35 minutes
Cook Time: 25 minutes
Total Time: 1 hour
Pin it for later?