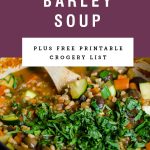 This vegetable barley soup builds flavor using your favorite vegetables. Add in a little lemon juice and fresh herbs for a terrific meal.

Barley is a cereal grain grown around the world. It's uses range from soups and stews to beer and bread.

Most commonly the stores sell a version called pearled barley. It is a lightly processed whole grain that has been polished to remove the outer bran layer. This makes for a quicker cooking grain that is popular because it is less chewy than standard barley is.

There are some partially cooked barleys out there called "quick-cook barley". These cook much faster than pearl barley and should be avoided for this recipe. If it is used the barley is done cooking before the vegetables and becomes soggy by the end.

What Are The Best Vegetables For Soup?

I love that this vegetable barley soup recipe is easily adaptable for the vegetables that you have around. This recipe below includes:

Additionally, you can use almost anything that you have on hand: corn, green beans, potatoes, spinach, beans or peas.

Do I Cook The Barley First?

Thankfully no, you do not need to cook barley before adding it to this soup. Instead, after cooking the beginning vegetables add in the vegetable stock and bring it to a boil.

Add the barley and stir it in so it gets even distributed into the liquid. Stirring regularly, cook until the barley is tender, about 30 minutes.

Cooking the barley directly into the soup traps the starch in the broth which makes a natural thickener. If you want a brothier soup, cook the barley separately. Strain and rinse it then add it to the soup right before serving.

What Herbs Go In?

When you add in the vegetable stock, also add in a bay leaf. This gives it time to flavor the liquid as the barley cooks. Make sure to always remove any whole bay leaves though because they aren't digestable.

You have the choice between fresh or dried herbs for this recipe, although I always prefer fresh if I have them. They offer a brighter, fresher flavor, while dried herbs can make it taste like it came from a can.

Any herbs you have on hand taste great in vegetable barley soup. I used fresh basil and oregano, but parsley, thyme, rosemary, or even mint taste wonderful.

Can I Freeze This Soup?

I love this barley vegetable soup recipe because it makes so much. This is great for serving a large family, having leftovers, or doing meal prep.

This soup freezes really well except for the zucchini, which become a bit soggy when thawed out. To counteract this, try not cooking the zucchini completely or just omit it all together.

Instead, you can substitute green beans or another favorite vegetable that freezes better.

Can I Make It In A Slow Cooker?

This vegetable barley soup is easy to make in a slow cooker, it just removes control over much the vegetables cook.

To make it in a slow cooker, add all the ingredients except the lemon, fresh herbs and zucchini. Turn it on low and for 6 hours or until the barley is tender.

Add in the zucchini, lemon and fresh herbs, and cook for another hour then serve.

If you make this vegetable barley soup a slow cooker soup, you need to add extra vegetable broth. This helps make up for the extra cooking time as well as the amount of liquid absorbed into the vegetables. Use a full two quarts instead of six cups.

Since I opted for tomato paste instead of diced tomatoes, this vegetable barley soup gets its acid from lemons. Squeeze one to two fresh lemons directly into the soup at the end to give it a bright and fresh flavor.

Make grocery shopping simpler with a printable grocery list for this vegetable barley soup recipe. The list is in standard grocery store amounts. If no size is specified, even the smallest package provides more than enough.