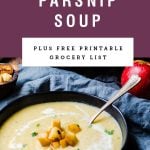 This creamy parsnip soup has a hint of fennel and is topped with caramelized apples. It's all the best of autumn fruits and vegetables.

This creamy parsnip soup recipe is a great way to enjoy the best of autumn produce. Made with parsnips, leeks, and fresh fennel for the purée, then topped with bacon fat cooked apples, this gourmet soup is easy to make

Parnsips are the underrated cousin of carrots. Not only do they look like them, but they are part of the same Apiaceae family. However, parsnips and white carrots are NOT the same thing. White carrots are just an heirloom variety.

Parsnips are a much sweeter and less hardy vegetable than carrots. When they are raw, they have an almost peppery bite to them. When they are cooked however, they are sweet but also a bit nutty.

Once this creamy parsnip soup is made, it has a light and slightly sweet flavor that balances nicely with the harsher fennel.

How To Cut Parsnips for Soup

To begin making this creamy parsnip soup start by washing, drying, and peeling the parsnips. The peel has little thick hairs that come off of it that can get stuck in your teeth, so peeling it is the right first step.

If you have super fresh baby parsnips, peeling isn't necessary. However, older ones definitely need it. Don't dig too deep with your peeler though, you only need to shave off a thin layer of the peel. It doesn't run deep.

Next, remove the root end of the parsnip just like with a carrot. Sometimes the flavor of parsnips gets more bitter towards the end, especially if is much thicker than the rest of the vegetable. Just cut it to a point where you can easily peel it and remove the stem.

Finally, the best way to cut parsnips for soup is as evenly as possible. Since it is pureed, none of the cuts need to be fancy, just functional.

The goal is more about getting the all to finish cooking around the same time. For you, that may be that they are all large you don't mind taking time. Or you may prefer them to cook quickly by cutting them small.

Either way, to prevent this creamy parsnip soup from being bitter they need to all finish cooking together.

How To Make This Soup

Start by putting a heavy bottomed pot over medium heat. Add some olive oil and sauté the garlic until it begins to get golden brown. Stir in the chopped leeks and continue cooking until they become translucent.

Next, add in the chopped fennel. Remember, fennel has a strong flavor, so if you aren't a fan of licorice, go light on the fennel and add extra leek instead.

Finally, add in the peeled and cut parsnips and cook until they begin to caramelize. The darker the caramelization the deeper the flavor.

Once caramelized, stir in the vegetable stock and bring it to a boil. Continue to cook, stirring occasionally until the parsnips are soft.

Use a blender to purée the creamy parsnip soup until smooth. If it isn't as thick as you like, return it to the heat and continue to simmer until it is what you like.

While your creamy parsnip soup cooks, use a small sauté pan to cook the apples.

Start by heating bacon fat until it is liquid. Add in the peeled and cut apples and cook until they are soft and ever so slightly caramelized. Stir it occasionally to try to get all the sides caramelized then add it to the soup right before serving.

The apples serve as both texture and garnish for the soup, so enjoy

Professional Recipe Tips from a Chef

I highly recommend using an immersion blender for this creamy parsnip soup. It's so much easier than transferring hot soup to a blender and trying to let it breathe enough that the lid doesn't explode off of it while blending.

For some other amazing autumn recipes, I recommend:

Make grocery shopping simpler with this printable grocery list for creamy parsnip soup recipe. Everything is listed in standard grocery store amounts. If no size is specified, even the smallest package provides more than enough. 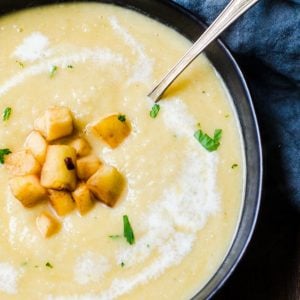