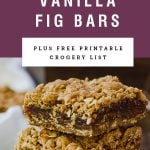 These delicious vanilla fig bars are so much better than homemade fig newtons. With a chewy oatmeal crust and vanilla fig filling, they are the perfect snack or dessert.

If you have a bunch of fresh figs, this homemade fig bar recipe is a great way to do it. This is exceptionally great if you have fig trees growing more than you can keep up with. Additionally, you can make large batches of the filling and freeze it for using later in the year!

How To Prepare the Figs

Don't be put off by the filling for this fig bar recipe. It is actually extremely easy to make as long as you have a good candy thermometer. This ensures you get the fig jam to the right temperature to get the jammy consistency.

To make the filling for these homemade fig newtons, start by preparing the figs. Do this by carefully washing and drying each fig, then remove the stem. Cut each fig in half and place it in a bowl, skins and all.

Using a sharp knife, get the vanilla flavor for this fig bar recipe by cutting a vanilla bean in half horizontally. Use the flat end of your knife to scrape out all the small beans and add them to the figs. Then put the cut vanilla bean pod in as well.

Pour the sugar over the figs and stir them up. They should immediately begin to feel squishy and get wet. Let the figs macerate in the sugar for at least one hour.

Why Do I Need A Candy Thermometer?

A really good candy thermometer helps you control the temperature of the fig jam filling. If your temperature is too low, the filling will be overly wet and jammy. It is also likely to slide out of the crust.

If the temperature of the fig bar filling is too high, you don't have enough moisture and it becomes gloopy. A really good candy thermometer helps you find that balance without extra work.

Simply attach the candy thermometer to the side of the pot so the tip does not touch the bottom. If it touches the bottom directly it gives you the temperature of the pot, not the jam. Just keep it as close to the bottom as possible.

After attaching, watch for the temperature to get to 220°F, which is the jam stage, about 20 minutes.

How To Make The Jam

To start making the vanilla fig jam, clip a candy thermometer on the side of a pot. Pour the large bowl of macerated fig mixture into the pot and start cooking over medium heat.

Cook until the thermometer reaches 220°F, which is the jam stage. At this temperature each of the figs should have fallen apart but you'll still have some large chunks.

After the jam has finished, remove it from the heat and let it cool completely. Carefully remove the vanilla bean pod and transfer to the baked crust.

The bottom of these vanilla fig bars is baked before adding the filling to keep them from getting soggy. This is blind baking. Afterwards, assemble the top like a crumble.

If you want the top to be more like a homemade fig newton, see the section below.

To make the crust for these vanilla fig bars, start by mixing together the flour, brown sugar, oats, and other dry ingredients in the bowl of an electric mixer.

On a low setting, pour in the 1 ¼ cups of melted butter. Let the mixer run until the crust is completely combined.

Preheat the oven to 350°F and line a 9x13" pan or a half baking sheet with parchment paper. Spread out the dough onto a thin layer in the bottom of the pan using the bottom of a measuring cup.

Bake for 15-20 minutes or until the edges begin to brown. Remove it from the oven and let it cool completely. It should have puffed up some, but this is good because that's part of how it stays chewy.

Once the filling is layered on top of the vanilla fig bars, repeat the same process with the top crust. Bake for 45 minutes or until

If you love fig newtons, you're going to love these as well. However, the outside crust of these isn't quite the same. It is still chewy and delicious but not a solid dough.

To make these like homemade fig newtons, combine the ingredients for the crust in a food processor and blend until combined.

This breaks apart the oats into smaller pieces and brings the ingredients together to be a more cohesive dough. Then, roll the dough out into roughly the same size as the bottom of the 9x13" pan. Use the bottom of a measuring cup to

Can I Make These Ahead?

Yes, these can be made up to three days ahead as long as they are kept in an airtight container.

If you love figs and have fig trees growing a lot of fresh figs, you can freeze the filling in. After the jam has completely cooled, transfer it to a Ziplock bag for up to 6 months.

Even though this gets to the jam stage it doesn't have enough sugar or acid for canning in a water bath. So if you are a home canner, rely on a pressure canner.

These oatmeal fig bars are a great alternative to store bought fig newtons. While not quite the same in texture because of the oatmeal, they are equally as delicious. It is well worth all the time you spend making it.

These fig bars stay fresh at room temperature for up to three days in an airtight container. Try not to refrigerate them because that dries out the crust.

For some other fig recipes, I recommend:

Make grocery shopping simpler with this printable grocery list for oatmeal vanilla fig bars. Everything is listed in standard grocery store amounts. If no size is specified, even the smallest package will provide more than enough. 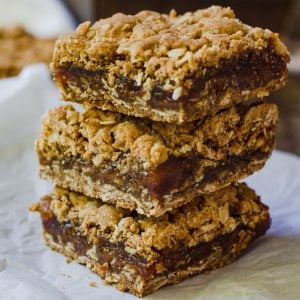