Home » Techniques & Skills » How To Store Mushrooms (Fresh and Dried) 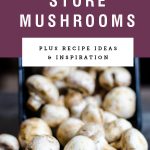 Mushrooms are a delicate and earthy vegetable that needs stored similar to its natural environment. Learn all the tips for the best way to store mushrooms so you never get the slime again.

Why Do They Get Slimy?

Mushrooms have a naturally high water content when fresh. This is why they shrink so much as you brown and caramelize them. That's the water cooking out of them.

After they are picked, mushrooms can continue to grow the same way berries continue to ripen. During this process a lot of that moisture changes and releases.

If the moisture is not kept as close to the natural enviornment as possible this is when they either shrivel or become slimy.

Shriveling happens because there isn't enough moisture, while slime is a result of bacteria growing within an excess of moisture. This is ultimately the first step to decomposition and a sign that it is time to throw them away.

Should Mushrooms Be Kept In the Fridge

If you are not immediately using the mushrooms they should be stored on a shelf in the fridge. Avoid the crisper drawer because the moisture content is too high and the mushrooms spoil faster that way.

Since they are prone to getting slimy and damp from condensation, it is important to store them with something porous to absorb or release the moisture.

Loose mushrooms do not have to be wrapped in a damp paper towel. Start with a dry one because the paper towel dampens on its own from the excess moisture releasing from the mushrooms. If you use a damp towel, they won't stay fresh as long and just get slimy

When To Wash Them

To prevent the slime on mushrooms, you need to keep them mostly dry. But not too dry or they shrivel. This is a fine balance to walk, so my recommendation is always to wash them right before use.

Similar to other vegetables, they last longer when left with all their natural environment in tact. When that is washed off, spoilage happens faster. Instead, leave them how you got them until right before you are ready to eat.

Since most mushrooms are already 80-90% water, it is okay to wash them immediately before use. You just want to be quick about it and not submerge them.

The best way to wash mushrooms is to place them into a bowl of clean water and gently toss them with your hands. Since the mushrooms float, the dirt gets knocked down to the bottom of the bowl and away from the mushrooms.

Next, remove the mushrooms from the bowl and transfer them immediately to a dry towel. Gently pat them dry then continue on to cook them.

This process should be done with any fresh or store bought mushrooms because it is easy for dirt to hide in the mushroom crevices. Even if they come pre-washed, a gently toss in the water may still release more trapped dirt.

If you're struggling to release all the dirt, especially from mushrooms like morels which have lots of small crannies, use a vegetable brush to help remove the dirt.

Can I Freeze Them?

Since fresh mushrooms are mostly water, they are super prone to freezer burn. This also means that after that high water content is frozen and thawed out, the mushrooms are often very mushy and won't cook like fresh.

If you have an abundance of mushrooms that you must do something with, you can freeze the mushrooms cooked. They will last stored in an air tight container for up to six months.

Frozen cooked mushrooms don't make the prettiest addition to a meal, but it is a quick way to add flavor to a sauce or soup. The biggest downside is losing the fond from the mushrooms. (This is the beautiful golden brown goodies that stick to the bottom of the pan during cooking.).

This can be absorbed into a sauce during cooking usually, but if you're freezing it is flavor that is lost.

Instead of just washing it out, once you're done cooking the mushrooms, add some water to the pan and simmer it to make a lovely mushroom stock for soups later. Complete utilization!

What About Dried Mushrooms?

Dried mushrooms are an affordable and delicious pantry staple. Whether you buy them that way at the store or you dehydrate yourself they are a great way to utilize mushrooms.

Dried mushrooms should be stored at in a cool dark place an airtight container. The further you get from dehydration the less potent and chewier they are, so try to use them close to when you buy them.

Once you are ready to cook, rehydrate the dried mushrooms using your favorite method.

If you have an abundance of mushrooms and are looking for a phenomenal recipe to make, I recommend: