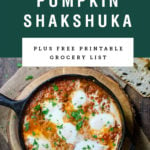 Pumpkin week is a sponsored event that includes gifts to me from the participating brands. All thoughts and opinions are my own, but I think you’ll enjoy this pumpkin shakshuka recipe as much as I do. Thank you for supporting the brands that make Food Above Gold happen.

With only a few ingredients, this pumpkin shakshuka recipe is loaded with autumnal flavor. Serve it on potatoes or with crusty bread for a delicious breakfast.

Fall is in the air, and we are celebrating our love of pumpkin with #PumpkinWeek hosted by Terri from Love and Confections and Christie from A Kitchen Hoor’s Adventures. All week-long 34 bloggers will be sharing 140+ fantastic recipes for all your Autumn celebrations, including breakfasts, baked goods, savory pumpkin recipes, desserts, and drinks. Thank you sponsors for providing the prize packages. Don’t forget to enter the giveaway below!

This pumpkin shakshuka recipe is a great way to use an opened can of pumpkin puree. This gluten-free savory breakfast is extremely flavorful and done in about 20 minutes. You’ll love this recipe with its autumnal twist and look forward to making it over and over every year.

Where is Shakshuka From?

There are many different styles of shakshuka (also spelled shakshouka), so depending on the recipe, it varies. There are debates of it deriving from Yemen, Morocco, Tunisia, Israel and many more.

At first, during the Ottoman Empire, shakshuka was served with meat. Throughout the years though, a meatless version served with eggs became more common.

What Is Shakshuka Made Of?

In its original Arabic, shakshuka translates to mean “a cohesive mixture”. It is made of poached eggs in a slightly spicy tomato stew. (Some call it a tomato sauce.)  While this may not sound appetizing for an American breakfast, it is a staple in North African cuisine.

Depending on the style you make, the spice vary. The most common ones however are cumin, paprika, cayenne pepper and/or nutmeg. For this shakshuka recipe, I’ve chosen to use smoked paprika. It accentuates the pumpkin nicely, and matches the fire roasted tomatoes even more.

How To Poach The Eggs For This Shakshuka Recipe

Most commonly, eggs are poached by submerging them in water. So the idea of poaching them in this tomato mixture may not completely live up to your expectations.

There are two definitions to poaching eggs however. One is to cook an unshelled egg in or over boiling water. The other is to cook the egg in a small amount of liquid. The latter is the one we’re using for this shakshuka recipe.

In order to poach the eggs however, you need to create heat all around them. If you don’t, the egg whites take forever to cook, usually resulting in a scorched tomato stew. After the eggs are cracked into the stew, season with salt and pepper and quickly cover the pan with a lid. Depending on how high the heat is, the eggs will poach in the tomato mixture in just a few minutes. For more information on what poaching is, check out my in-depth article on the cooking method here.

Do I Have To Use A Cast Iron Skillet?

As is the custom, most shakshuka recipes are served in cast iron or a tagine (like you would find in Morocco). Since most people don’t own a tagine though, cast iron is the easiest go-to.

This sometimes makes people nervous because there can be a chemical reaction between cast iron and tomatoes. Especially if they are exposed to each other for long periods of time. In addition, the acid from tomatoes can strip some of the seasoning that cast iron needs.

I like using a cast iron because it distributes temperature evenly. This helps make sure the eggs all poach at the same rate. Nobody wants chewy, tough eggs on one side and whites that aren't cooked on the other.

What To Serve with this Shakshuka Recipe

Pretty much any starch that you can use as vessel to get the shakshuka from your plate to your mouth works. It is intended to be eaten without silverware, so a very crusty bread or warm pita is ideal.

If you want to be modern try serving this shakshuka recipe with:

Tips To Make This Shakshuka Recipe Even Better

Don’t let the pumpkin in this shakshuka recipe scare you off. It doesn’t lose any of its traditional, prominent flavor. The pumpkin does sweeten the recipe a bit, so the fire roasted tomatoes compensate for that.

This does make a thicker shakshuka than most recipes, getting a heartier stew consistency. You can thin it out with a bit of vegetable stock if you want.

Want a free printable grocery list for this pumpkin shakshuka recipe?  Get it here. Everything is listed in standard grocery store amounts. If no size is specified, even the smallest package will provide more than enough. 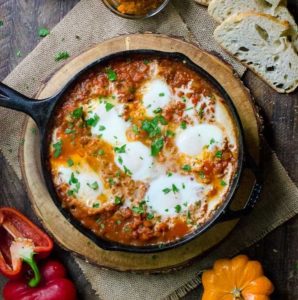 Shakshuka is often topped with feta cheese.  This may not taste right with the smoky flavors of this recipe, but can be used if desired.