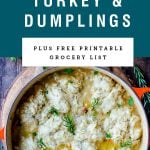 This turkey and dumplings recipe is packed with delicious aromatics and vegetables. With simple rosemary dumplings added it is a perfect way to use leftover Thanksgiving turkey.

This recipe is like an upscale chicken and dumplings, which is the pinnacle of comfort food for many people. To get a stew that is perfectly thickened from the dumplings, finish it in the oven rather than boiling them on the stovetop.

How Do You Make Dumplings From Scratch?

Dumplings are pretty much drop biscuits that get simmered or boiled. Because of this, the dumplings are more about incorporating ingredients and less about method. They should always include: flour, baking powder, a fat and a liquid.

To make dumplings from scratch all you need to do is mix together the ingredients just until they are incorporated. Be careful not to over-mix them or your dumplings can get a bit chewy.

Once the dough is combined, gather a large spoonful to drop in. To keep your hands clean, use a second spoon to scrape the dough into the hot liquid. The amount you choose to use for the dumplings is completely dependent on how big you want your dumplings to be. They at least double in size when they cook, so give them some distance when adding them.

Is is also important that the pot of turkey leftovers be HOT when you drop them in. This forces the outside to cook quickly so it doesn't dissolve into the mixture.

How Long Should They Boil?

Traditionally, dumplings are completely submerged into the liquid for cooking. Using this method, they only need to boil for 3-4 minutes in a large pot. This can change though depending on dumpling size and how many you cook at once.

However, this turkey and dumplings recipe calls for them to be dropped on top of boiling liquid then steamed. This gives it a rustic pot pie style topping. It also allows you to use a shallower baking dish or dutch oven. With this method, the dumplings need a little longer to cook, around 15 minutes or more.

If the dumplings begin to disintegrate or have become chewy, this is usually a sign that they are overcooked. As much as it is tempting, try not to uncover the pan and peek at them. This removes much of the necessary steam that helps them cook. Having to start back from scratch, it takes more time and usually makes them overcook.

It is made "rustic" because it is cooked in the oven like a turkey and dumplings casserole. Doing it this way gives you better temperature control so the dumplings stay fluffy. It also keeps the vegetables from scorching to the bottom of the pan while the dumplings steam.

Simplify grocery shopping with this printable grocery list for turkey and dumplings. Everything is listed in standard grocery store amounts. If no size is specified, even the smallest package will provide more than enough. 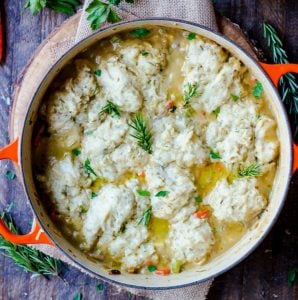