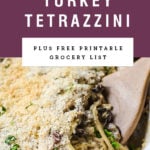 When you have leftover turkey, nothing beats making this classic turkey tetrazzini recipe. It’s a flavorful baked pasta casserole made with mushrooms, peas, and flavorful cheese.

This turkey tetrazzini recipe is a great way to use up leftover dark meat. (Especially if you use my hack for getting it off the bone!) It also makes a very palatable alternative to tuna noodle casserole. It’s more upscale, but brings a lot of the same elements into the dish.

What Is Turkey Tetrazzini?

Turkey tetrazzini is a pasta casserole recipe that is made in a pot then transferred to a baking dish. It gets topped with bread crumbs, parmesan cheese, and parsley before baking and serving.

Traditionally, the tetrazzini filling has turkey or chicken, sautéed golden brown mushrooms, peas and cheese in a bechamel sauce. Beyond that, there isn’t a universal standard recipe so many elements vary. Some use cream cheese while others cook spaghetti or eggs noodles instead of linguine.

We often assume that because a recipe is made of pasta and creamy sauce, it must be Italian. However, turkey tetrazzini was created by the chef at the Palace Hotel in San Francisco, around 1910. He titled it after a long time resident of the hotel, an opera singer named Luisa Tetrazzini. Thus giving it its very Italian sounding name.

How Is It Made?

Turkey tetrazzini is made by first caramelizing mushrooms, shallots, and garlic in butter. After setting it aside, the fond leftover by these ingredients is deglazed with dry sherry. This makes the foundation for the sauce before a light roux of butter and flour gets made. Then the sauce is formed with chicken stock, whole milk and heavy cream.

While the sauce is made, you cook the spaghetti or linguine until not quite al dente. You add the mushrooms, frozen peas and pasta into the sauce and you transfer the mixture into a 9x13 baking dish.

Stir together bread crumbs, parmesan cheese, fresh parsley, salt and pepper. Sprinkle it on top of the turkey casserole and bake at 425 degrees for up to a half an hour.

Why This Recipe Is The Best For Thanksgiving Leftovers

This turkey tetrazzini recipe is ideal for Thanksgiving leftovers because it breaks away from traditional holiday flavors while staying comfort food. Once you have the hang of it, this recipe is easy to make because the sauce doesn’t need fervent attention. However, this recipe is completely from scratch and doesn’t use aids like cream of mushroom soup or cream cheese.

This also is a great recipe for both leftover dark meat and light meat. This thick, creamy sauce lends moisture that hides if the meat has been overcooked.

Professional Tips To Make It Even Better

This recipe uses dry sherry in the preparation as a simple flavor boost. However, sherry isn’t always a flavor people love. If you would like to use an alternative ingredient, you can swap it out for double the amount of white wine.

Simplify grocery shopping with this printable grocery list for classic turkey tetrazzini. Everything is listed in standard grocery store amounts. If no size is specified, even the smallest package will provide more than enough. 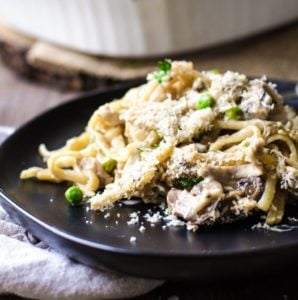