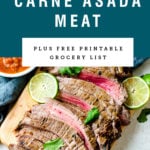 Carne asada meat is great for making tacos, serving on nachos, dishing up in chilaquiles, or just enjoying by itself. No matter how you plan to use it, this recipe gives you the most flavorful steak possible.

The recipe for carne asada meat is surprisingly simple, but the method for getting it perfectly tender and moist isn’t as straightforward. Follow all of my professional cooking tips to get the very best carne asada you’ve ever had!

What Cut Of Meat Is Carne Asada?

Since carne asada is marinated for a long period of time, the acid tenderizes the meat. This means the most fitting cuts will come from the flank or plate of the cow. It will be less fatty, but still pack a lot of flavor.

The cuts of meat that are best for carne asada meat are :

When choosing between skirt steak or flank steak, keep in mind the thickness. Skirt steak is thinner, will absorb the marinade faster, and cook quicker than flank steak. The flank steak however will give you more of a “meaty” taste and give a better appearance. Flank steak does also tend to run on a higher price point, averaging $1 - $2 more per pound than skirt steak.

There should be a pattern of flavor from a perfectly cooked piece of carne asada. It should taste first and foremost of quality beef, followed by a light charbroiled taste, and ending with the marinade. This is why the cut of beef you choose is important.

To get the smoky, charred flavor, the carne asada is cooked on a grill or under the broiler. If you aren’t comfortable with your broiler and want to still get that grilled meat flavor indoors, you can choose a grill pan as well.

How To Make The Marinade

The marinade for this recipe is made of a lot of traditional Mexican flavors. The amount you use each of them in impacts how the marinade tenderizes the meat, so if you make an alterations, try to keep the acid and fat ratios the same.

My Best Pro Recipe Tips For Moist and Tender Meat

Keep in mind that the cooking times for this carne asada recipe are estimates. It will vary greatly depending on the thickness of your steak and the temperature around it. For the best success use a meat thermometer.

EXTREMELY IMPORTANT NOTE! Not all meat thermometers are designed to be exposed to high temperatures like what you want for this carne asada recipe. Double and triple check your meat thermometer’s specifications to make sure yours won’t melt or explode during cooking.

If you're worried about this, just take the temperature after removing it from the oven. If you follow this recipe, it should give you between about medium rare for flank steak and medium for skirt steak.

Want a printable grocery list for this carne asada recipe?
Everything is listed in standard grocery store amounts. If no size is specified, even the smallest package will provide more than enough.

Get a perfect char on your steak for a exceptionally flavorful carne asada meat. Use it in tacos, on fries, or in a burrito bowl!
Course: Beef, Main Course
Cuisine: Mexican
Author: Mackenzie Ryan
8 servings
Prep Time: 10 minutes
Cook Time: 12 minutes
Marinating Time: 12 hours
Pin it for later?

Salt slows down a marinades effectiveness, so only use it to season the steak right before broiling. To cut the carne asada meat thinly, hold your knife at a 45° angle.  This helps keep the knife from wiggling when you cut. Since the marinade has oil in it, you can use it under the steak to prevent it sticking to the foil.