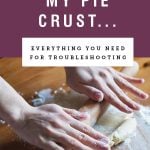 If you've ever asked yourself "why did my pie crust..." then you're in the right place. Get all the answers to the most common pie crust problems so you can troubleshoot and fix your pies.

Why Does My Dough Stick To The Rolling Pin?

There are two reasons pie dough might stick to a rolling pin. One is that it is too warm so the fat in the dough becomes sticky. Chill the dough in the refrigerator for fifteen minutes and try again.

The second reason is that the dough is too wet. Pie dough only needs a little bit of water to come together because it relies on the butter as a binder. However, if the water density becomes too high, the dough becomes sticky.

Fix this by dusting the rolling pin and the outside of the pie dough with flour to absorb excess moisture. More may need added as you continue to roll out the dough.

Why Is My Pie Dough Cracking?

If you are using a frozen pie dough, it is cracking because it isn't thawed out enough. It needs about 90 minutes on the counter at room temperature before it is ready to be unrolled.

If your homemade pie dough is cracking it is because the dough is too cold or too dry.

If it is too cold just give it a 10-15 minutes at room temperature and then try again. The pie dough should always be pliable but not limp.

If the dough is too dry, spray it with water from a spray bottle to lightly dampen it. This keeps it from getting too wet to the point of wonder why the pie crust is now sticky. Always start with less than you think you need.

Why Did My Pie Dough Shrink?

Shrinkage is almost universally the result of the dough being too warm or too tough. This sometimes becomes a problem if you make your dough in a food processor.

Since pie dough is usually a glutinous dough, it needs time to rest or it shrinks to a smaller size. The longer you give it to rest, the better. Let it rest for an hour after rolling it out before transferring to a pie plate.

Once the dough is in the pie plate, let it chill for at least fifteen minutes in the refrigerator so the butter hardens. If the butter is too warm during baking, the weight pulls down the sides of the pie crust and makes it too heavy to stick to the sides.

Why Did My Pie Crust Burn?

Most pies take about an hour to bake, usually so the filling can set and thicken. In this period of time, the crust usually darkens and often burns if not taken care of.

After fifteen minutes of baking, the edges of the pie should be covered. This is easily done with a small wrapping of aluminum foil or with a purchased silicone pie shield.

This slows down the caramelization process of the fats in the dough and prevents overcooking before the pie filling is finished.

Additionally, the temperature of the oven might be too high. You should cook pie at a high temperature to quickly cook the bottom of the pie crust, but should be dropped low to cook the filling. If the temperature is left too high it can burn the crust.

Why Is My Pie Crust Puffy?

A really great pie crust is made of pea sized pieces of fat that makes it tender and flaky. If you are blind baking a pie crust, or baking it without any filling to get it crispy, the bottom and sides of the dough should be pierced multiple times with a fork.

These small little holes should go all the way through the dough and are there to release steam that build up from the cold water and butter. This steam helps make the flaky layers of the pie crust, but without a release for it it puffs up.

Some of it settles during cooling, but not all of it will, which might make it difficult to get all the filling into the pie.

My Double Crust Doesn't Stick Together

Some pies, like apple pie, use a double crust, or a crust on the bottom and top of the pie. Sometimes the crust is left mostly whole or uses a lattice or other decoration, but no matter the styling it needs to attach to the bottom crust on the edges.

If the dough isn't attaching this is usually because the dough is too cold or dry. If it is too cold leave at room temperature for 10-15 minutes and try again. The dough should be pliable but firm.

If the dough is too cold, the best way to fix it is too use your finger to dampen it with a bit of cold water. This should work like a glue to help connect to the double pie crust together.

Why Is My Pie Crust Crumbly?

A great pie crust should be tender and flaky. If it is mealy or crumbly this is usually the result of being overworked.

That means that during the kneading process as you brought the dough together you worked the gluten too much and didn't let it rest long enough.

Sometimes it is difficult to find the right balance between firm and pliable, so think of it as bends without breaking but ever so slowly droops when held up.

Why Is My Top Crust Too Light?

Since the top of the a double crust gets extra moisture from the filling, it doesn't brown and crisp up the same way as the edges of the pie does. As a result, it needs a little extra fat and moisture to help the browning process.

Brush the top crust with a scrambled egg yolk, a little milk, or some heavy cream before baking to darken the top crust.

Why Is My Pie Crust Soggy On The Bottom?

Depending on how heavy and wet the filling is, some pies like pumpkin pie need to be blind baked first. This is the process of baking the pie without any filling in it so it can get crispy.

If you are making a pie that doesn't need to be pre-baked, then the bottom crust is soggy because it wasn't baked at a high enough temperature at the beginning. This quick baking at a high temperature helps crisp up the bottom of the pie crust so it can take the moisture and filling's weight.

Thanks so much for stopping by