This stuffed pork tenderloin recipe is sponsored by California Prunes. All opinions are my own, but this recipe is delicious, and I think you’ll love it as much as I do. Thank you for supporting the brands that keep Food Above Gold working.

Very few of us have enough prunes in our diet because we have this idea that they are only for babies or elderly people. If you aren’t familiar with cooking with prunes, they are an extremely versatile ingredient. They pair well with both sweet and savory and bring a fantastic depth of flavor to this stuffing.

I personally love buying California Prunes because they are the largest and sweetest variety of prune. The growers carefully watch the prunes as they grow to make sure you get premium flavor and quality. Plus, they are dried without any chemicals or additives.

Learn more about the California Prunes difference here, and make sure to check the back of your packaging to ensure you’re getting the best prunes out there! You only need five of them a day to get a whole serving of fruit, improved gut health, and healthier bones. They’re going to be your new favorite ingredient, whether whole, diced, or pureed!

Be sure to check out California Prunes online at www.CaliforniaPrunes.org and on social media @CAprunes.

How To Trim A Pork Tenderloin

Before you begin stuffing the pork tenderloin, you need to remove the silver skin. It’s the only “trimming” necessary with this specific cut of pork. Silver skin is a thin bluish-purplish layer that sits on top of the meat. It doesn’t usually cover the entire tenderloin, so that makes the work of removing it quick.

To remove, simply slide a very sharp knife under one end of it. Once you’ve lifted enough to grab, peel the rest of the silver skin off in one smooth movement. Any stubborn little pieces you can remove with the knife.

Unlike fat, silver skin is a fibrous layer that doesn’t caramelize or dissolve when cooked. This ultimately means that if left on, the silver skin will make your stuffed pork tenderloin tough and chewy.

How To Butterfly A Tenderloin

In order to stuff a pork tenderloin and get it to roll, you need to butterfly it first. The term “butterfly” refers to how you cut the meat, which unfolds to create butterfly wings. (I think of it more like a book.)

Make sure to watch how far you are cutting into the pork tenderloin. If you cut too far, you’ll accidentally split the pork apart, which creates holes where the filling will spill out. If you don’t cut far enough, you’ll get an uneven and lumpy stuffed tenderloin. Try to leave about an inch of meat that isn’t cut through.

For more tips on getting a perfectly golden-brown pan fried crust, check out my six top tips here.

In French cuisine, the method of stuffing and rolling meat is called a roulade (pronounced roo-lahde). It is then seared on the cooktop for a beautiful golden-brown crust and finished in the oven for a moist and beautiful pork tenderloin.

Judging the internal temperature of the stuffed pork tenderloin can be tricky because of the stuffing. You want to aim your thermometer at an angle through the center and into the thickest part of the roulade. 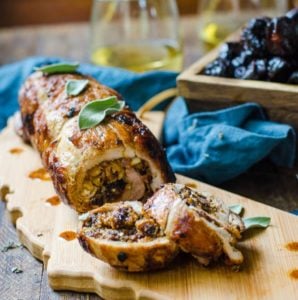 To make this stuffed pork tenderloin recipe easier, stuff it the night before.  It will give the flavors a chance to marry and enhance each other. As long as your thermometer reads and internal temperature of 145°F, it's okay if the pork is still a little pink in the middle.