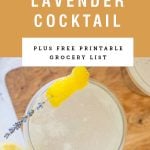 If you love lavender, then try it in a cocktail! Use a homemade lavender simple syrup to give the floral essence to this cocktail.

I love this lavender cocktail because it is fancy enough to be used for a bridal shower, but also approachable enough to be the perfect summer sip.

What Kind of Lavender?

There are two main types of lavender: ornamental and culinary. Both are edible, but culinary lavender has a better flavor and is more aromatic. It is also less likely to become bitter.

If you choose to use fresh lavender for the simple syrup, you’ll need twice as many lavender buds because they aren’t as potent as dried lavender.

How To Make the Lavender Syrup

To make the lavender honey simple syrup, place a small saucepan over medium heat. Pour in the water, then bring it to a boil. Remove it from the heat and stir in the lavender and honey. Let it cool completely then strain out the lavender.

Adding the lavender at the end, instead of boiling it, helps keep it from getting bitter. It also subtly adds the floral notes without becoming overpowering. You don’t want your lavender cocktail to taste like you’re sniffing essential oils.

Once the syrup is made, it stays good up to two weeks in the refrigerator in an airtight container. Using ½ cup of water and ½ cup of sugar, you’ll get a whole cup simple syrup, which makes 16 of these lavender cocktails.

How To Make The Lavender Cocktail

Similar to a lavender martini, this cocktail uses vodka. However, instead of using lemon juice as the balancing flavor profile, we’re used a hint of vanilla vodka. This mixed with the lavender infused simple gives a unique and balanced flavor profile.

Fill a cocktail shaker with ice and add the vanilla vodka, lemon juice, and lavender simple syrup. Shake vigorously for 20 seconds, then strain into a chilled coupe glass.

How To Garnish It

I like to use a lemon swath that is peirced with a lavender stem to garnish this cocktail. I like this because it gives a rustic appearance, but also provides an extra boost of lemon from the peel.

To make a large lemon swath, apply some pressure to a peeler and peel as far around the side of a lemon as possible. Then, hold it over the lavender cocktail and squeeze the oils into the drink.

Then lightly spear the swath with a cocktail pick and remove it. Now line up a stem of laveneder with the pick and press it back through the holes you previously made.

Finally line the cocktail pick over one third of the rim.

I don’t like to use actual lavender buds to garnish this cocktail because nobody really enjoys accidentally sipping one up. And try as we might, one or two always falls into the drink and has to be fished out. Stick with the whole stem if possible.

I highly recommend chilling your coupe glass in the freezer before making this lavender cocktail. It helps keep the cocktail cold, and for a summer drink that is important. The weather will warm it up enough, so this does the drink a favor. 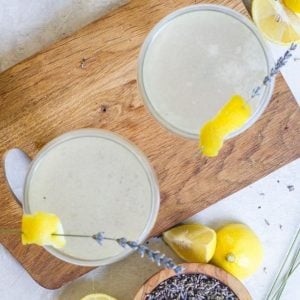 If you don’t like honey simple syrup, you can use standard lavender simple syrup in its place.